* It's a bit late for resolutions, but for those who want to lose weight, have I got the plan for you! Actually, Good Housekeeping (Aug 1956) has the plan. 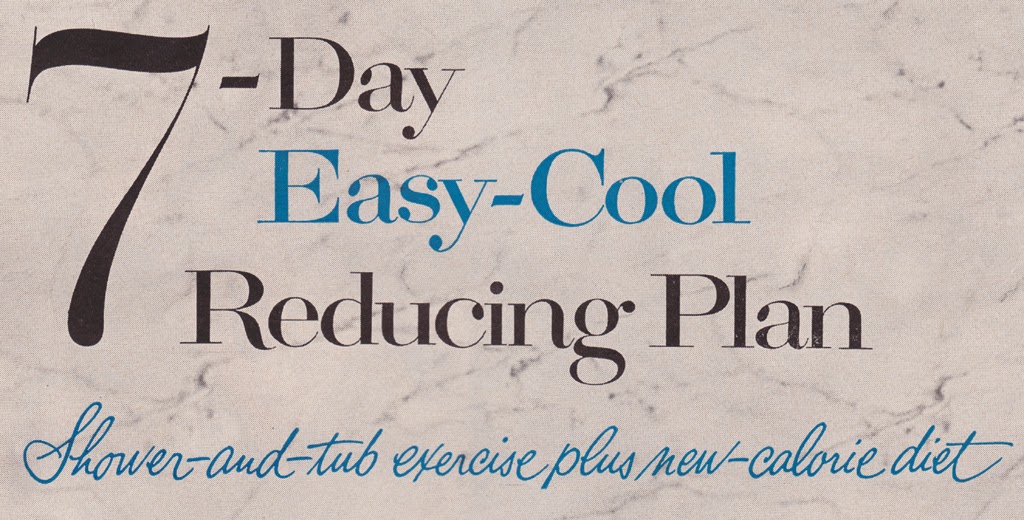 The shower and tub exercise plan is illustrated with artfully blurred photos of a brunette - cause you're supposed to be naked when you do the activities. Like lying on the bathmat with your legs in the air swinging your arms. It's the rare bathmat that looks inviting enough to lie down on.

But the diet! Whoa nelly!
The article says all meals have the same amount of calories, but it doesn't specify a number - it must be quite a number.

Oh yeah, 2 slices crisp bacon for breakfast! Sherbert and cookies for a snack! Meatloaf, broccoli and carrots, and angel food cake for dinner! 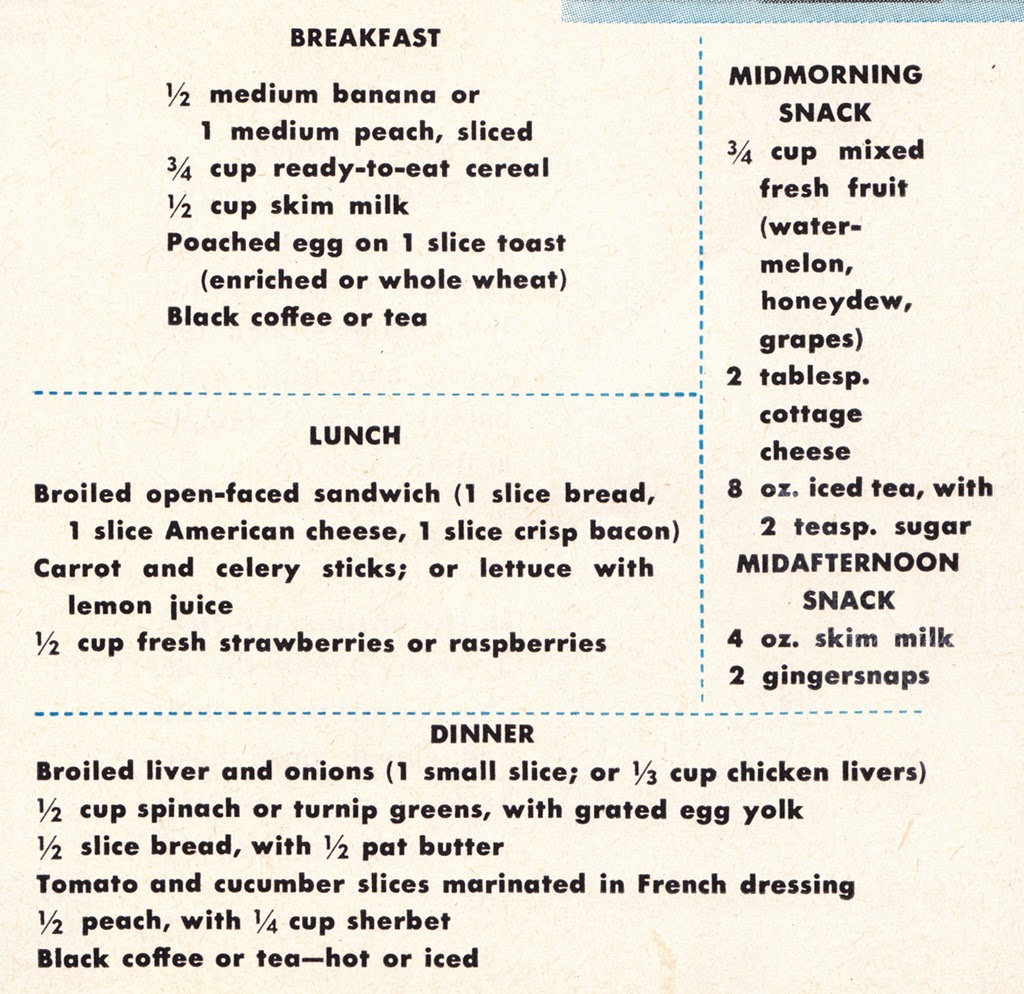 Sausage and egg for breakfast, 1 1/2 slices crisp bacon for lunch, corned beef for dinner! I think maybe this is the Bacon Diet. But what's with buttermilk being equal to skim milk to drink?

Sadly, a day without bacon - and dates for breakfast. But a baked potato with butter for dinner and a sandwich for a snack sounds good to me.

Day 2 without bacon, and bouillon-on-the-rocks. I would have lost alot of weight back then, because cold condensed bouillon is slightly higher than lima beans when it comes to unappetizing food. But hey, 2 biscuits for breakfast and 2 biscuits for dinner!

Woo hoo - French toast with syrup and 2 slices crisp bacon for breakfast! Steak, carrots and beets for dinner with custard for dessert! But sorry, 1 cup of milk and 1 cracker does not a snack make. And all the bouillon I want would be zero, nil, none, no siree. 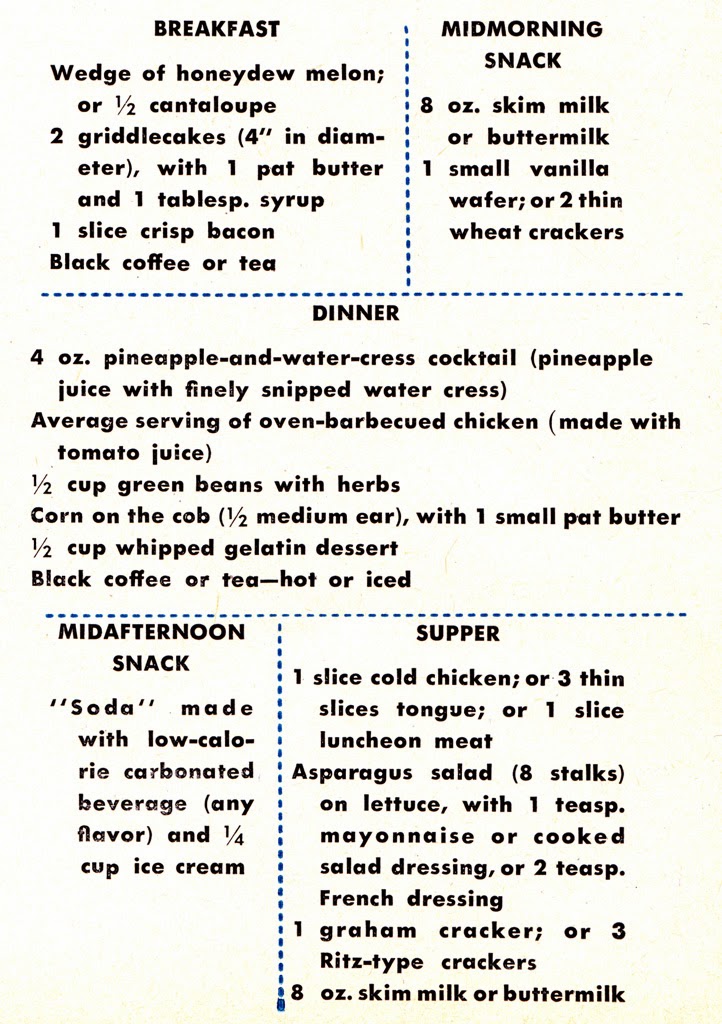 Let's end the diet week on a happy note :) Breakfast is 2 pancakes with syrup, and our dearly beloved bacon! Snacks are ice cream soda and 1 vanilla wafer. Dinner is barbecued chicken with corn on the cob! Supper is - wait, hold the tongue, just give me the chicken please. And I like asparagus, no problem there.

* It'll take at least a year to get in to see a therapist, since it needs to be free, so I got a book from the library in the meantime. And the Depression chapter suggests that you add more activities that give you a sense of mastery.
Therefore, blog time!
at 3:05 PM 0 comments

* It's 4 days until Halloween and I haven't done a thing except buy 2 magazines and some coasters. I used to love Halloween, love to decorate and dress up, love to talk about it. I still think it's pretty, but I've only been to Target once. This year I just don't care - actually, the past few years, each year I've cared less and less.
Haven't been scanning any book covers either. It all seems pointless, just clutter.

It's feast or famine when it comes to paperbacks. In the past month I've acquired a lovely bunch of books - Ellery Queen, Agatha Christie, Erle Stanley Gardner - with titles like "Home Sweet Homicide" and "While Murder Waits."
Keep checking my Flickr for fabulous painted covers!
at 11:32 AM 0 comments

* Panic stations!
Due to Flickr's recent change, people are talking about leaving. One of my favourite contacts has already quit, and erased all of his photos.
I am frantically going through my Favourite photos and saving the ones I want to keep forever (especially embroidery patterns).
People are moving to ipernity, which looks exactly like Flickr used to.

* More fun ads, this time for the ladies:

No price, not tons of words, just a picture that says "when a fella stares at the back of your head, you won't lose your cool."

The most demure Frederick's ad I have EVER seen.


Taken from Teen magazine, which was aimed at "preteen and early teenage girls, 10 to 15."
Selling a shirt with "Caress" written in large letters on the boob to 10-year-olds. And here I thought Victoria's Secret and Juicy were responsible for putting words in inappropriate places on growing girls' bodies.